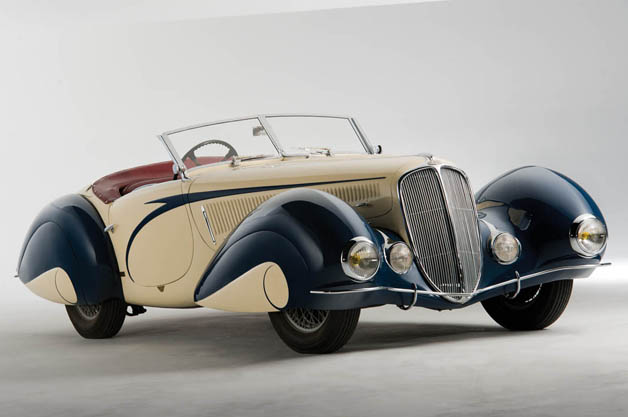 Malcolm S. Pray Jr was a known entity in the American automotive scene. He owned the largest Audi and Saab dealership in America, presided over several dealer councils and had a considerable classic car collection. Sadly, Pray passed away this past August, and his family has consigned 17 of his beloved cars to RM Auctions - most notable among them this beautiful Delahaye roadster.

With coachwork by Figoni et Falaschi, this 1937 Delahaye 135 Competition Court Roadster was termed by Pray's wife Natalie as "Malcolm's French Mistress" and it's not hard to see how he could have fallen to its charms. The Parisian coachbuilder had famous French illustrator Géo Ham design the Art Deco bodywork, completed in two-tone navy and ivory over a deep red interior.

It'll be joined on the auction block at Amelia Island by sixteen other classics from the Pray Collection, including a 1961 Ferrari 250 GT Series II Cabriolet and a 1957 BMW 507. RM isn't saying how much it expects these classics to fetch when the gavel drops on the Floridian isle come March, but as far as the Delahaye goes, there are few things we wouldn't give to own a piece of rolling artwork like this.

The Amelia Island Concours d'Elegance has more clout every year and is getting a reputation as Pebble Beach minus the madness. Held in March this year, it celebrated Ducati and the 50-year anniversaries of Lamborghini, the Corvette Sting Ray, Porsche 911 and the Ford GT40.

Justin Lapriore was there, and seemingly everywhere, getting footage of the various wares on display on the lawns and the sand and the runway. The resulting video, Born of a Blue Sky, is a 16-minute survey of some of the finer sights and plenty of engine sounds. Check it out below.

'Born of a Blue Sky' brings the Amelia Island Concours to you originally appeared on Autoblog on Fri, 03 May 2013 12:45:00 EST. Please see our terms for use of feeds.

As many invitations that I receive to drive the latest and greatest the automotive industry has to offer, my ears always perk up just a little bit more when the invite specifies a ride in a particular vehicle. Normally, I'd be expecting to ride shotgun in some sort of development mule or prototype, but during the Amelia Island Concours d'Elegance last month, Mercedes-Benz offered to give me a ride in a fully restored 1910 Benz 21/80 Prinz Heinrich racecar. While hundreds of cars sat parked on the Ritz-Carlton Amelia Island golf course, Mercedes shuttled me to a nearby road canopied by oak trees draped in Spanish moss to spend just 30 minutes with this super-rare antique racer.

Cars like the 21/80 were used in long-distance races between 1907 and 1911, and Mercedes-Benz says that they were among the first true sports cars. This particular example (wearing the No. 38) is owned by Mercedes, and it was recently restored to practically brand new condition at the Mercedes-Benz Museum in Stuttgart.

Originally developed with the sole purpose of being a Ferrari rival to compete at the 24 Hours of Le Mans, the Ford GT40 became a prominent racing machine in the 1960s in both Europe and the US. Not wanting to leave such an important car out of the fun, the 2013 Amelia Island Concours d'Elegance also took time out from its other celebrations to recognize the 50-year anniversary of the GT40.

Over its short lifespan, the GT40 was offered in a handful of configurations, but the classic short-tailed (Mk I and Mk II) bodystyles were well represented... especially in Gulf livery. James Glickenhaus (of Ferrari P4/5 fame) had his bright yellow Mk IV in the field, and there were several others in this bodystyle, including one that has seen plenty of time on the track judging by its chipped-up nose.

As a fitting statement for the car's lengthy racing history, GT40 Chassis Number 1075 won this year's Concours de Sport award. This car took home the checkered flag at Le Mans in 1968 and 1969, and racked up a total of six wins in just 11 races.

Lamborghini celebrated its 50th anniversary at the Geneva Motor Show with the introduction of the ultra-limited-production Veneno, but the 2013 Amelia Island Concours d'Elegance had an even rarer Lambo on stage. Parked next to the all-new 2013 Aventador Roadster, Lamborghini displayed the world's only Miura Roadster from 1968.

It wouldn't be a Lamborghini display without the Countach, of course, but there were also some of Italian marque's more unique models, including a 1971 Espada, a 1969 Islero and a 1966 350 with its exquisite backward-bent A-pillars. Lamborghini North America COO Michael Lock was also on hand at the show confirming that two of the three Veneno models have been sold to US buyers.

Amelia Island 2013: Lamborghini celebrates its golden anniversary originally appeared on Autoblog on Wed, 13 Mar 2013 19:00:00 EST. Please see our terms for use of feeds.

While this year marks 60 years of the Chevrolet Corvette, the 2013 Amelia Island Concours d'Elegance focused on one of the coupe's most sought after models, the 1963 Sting Ray. General Motors design boss Ed Welburn was on hand to show off the all-new C7 Corvette, but even the hard-edged styling of the 2014 Stingray couldn't take away from the beautiful 1963 models sitting out on the field.

In addition to the original Sting Ray and the 1959 Sting Ray Concept, some of the other classic 'Vettes included "Big Tank" racecars, an interesting cutaway coupe, a right-hand-drive Z06 and the attention-grabbing 1963 Corvette Rondine by Pininfarina. Another impressive Corvette was the 1964 Corvette XP-819 rear-engine prototype experimental vehicle. Owner Mike Yager had the car finished as a driving chassis for this year's show, but promises the car will be back to its original glory in time for next year's event.

Perhaps one of the most iconic sports cars in the world, it was no surprise that the Porsche 911 showed up in numbers to the 2013 Amelia Island Concours d'Elegance. Although the original 911 launched 50 years ago, the original and current models are instantly recognizable as 911s, and since the 911 has a storied racing background, there were probably just as many racing versions of the coupe as there were street-legal versions.

As the show's 2013 honoree, one of the prime racing examples was a 1970 Porsche 911 S raced by Sam Posey. There were so many cars in attendance, we didn't know where to look, but a 1985 911 Speedster concept and a Porsche-owned, rally-ready 911 Type 953 were definitely among the more impressive standouts. As an added bonus, Jacksonville-based Brumos Porsche had many of its classic racecars on display including a beautiful 959.

The 18th-annual Amelia Island Concours d'Elegance took place this past weekend, and in one of the show's biggest years yet (bringing in more than 25,000 spectators and attracting more than 300 vehicles), two powerhouses ended up winning the judges' hearts. The top Concours d'Elegance award went to a 1936 Duesenberg SJN, while the Concours de Sport went to one of the celebrated marques, a 1968 Ford GT40.

Owned by Helen and Jack Nethercutt of Sylmar, CA, this flawless Duesy is described as "one of the most powerful open cars of the 1930s," and it displays design cues of the era like rolled fenders and a tapered rear end. The SJN's supercharged straight-eight allowed it to accelerate to 100 miles per hour in just 17 seconds - surely not a disappointing feat for its day.

On a much different level of performance and timelessness, this Gulf-livery GT40 from the Rocky Mountain Auto Collection is not outdone by the elegance of the big Duesenberg thanks to some well-documented racing history. This not only includes winning at LeMans in both 1968 and 1969 - Chassis No. 1075 also managed to win a total of six times in just 11 races.

In addition to these high-profile winners, the 2013 Amelia Island show also celebrated the 50-year anniversaries of the Lamborghini brand as well as sports cars like the Chevrolet Corvette Sting Ray, Porsche 911 and, of course, the Ford GT40. Next year's show is already confirmed to celebrate Italian car builder Zagato, and we wouldn't be surprised to see a Ford Mustang class recognizing the car's 50th birthday.

Any motoring enthusiast worth his salt knows and reveres the Goodwood Revival. While the Festival of Speed is exactly what the name states, the Goodwood Revival is an experience unlike any other. More than just vintage racing, nearly everyone in attendance dresses in period-correct clothing, and you are immersed in a different era. Now, if only we could have something like that here in the States.

It appears that may be in the works, as Amelia Island Concours d'Elegance founder Bill Warner is in talks with Goodwood's Lord March to bring an event like the revival to the United States. According to the report from Auto Minded, the aim is to have an event take place in the fall, after the conclusion of Europe's vintage events.

The report suggests that the Florida town of Fernandina Beach, to which Warner has strong ties, is an ideal location. The town has a municipal airport that can provide facilities for vintage aircraft as well as the layout for a race course. (The FAA would need to approve the location.) Additionally, Fernandina Beach is close to luxury resorts that befit the concours/vintage-racing set.

While there are several prominent Concours events, such as Pebble Beach. Amelia Island and Greenwich, as well as racing events in Lime Rock and Monterey, the US does not have a revival-type event that throws you into the past the way that Goodwood does. Let's hope this plan comes to fruition.

Goodwood Revival-style event may come to the US [UPDATE] originally appeared on Autoblog on Sun, 21 Oct 2012 12:33:00 EST. Please see our terms for use of feeds.