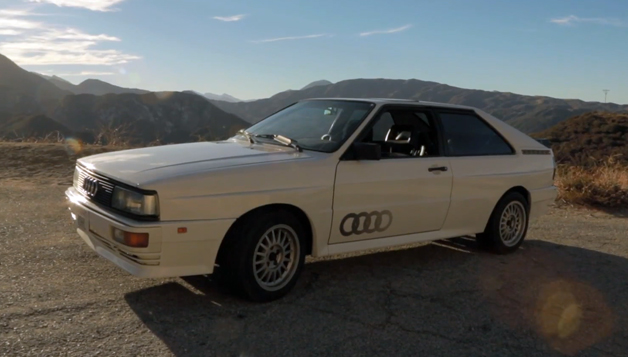 Audi started a revolution in the world of rallying when it paired an all-wheel-drive system with a turbocharged, five-cylinder engine and a rakish, three-door body. That car, the Quattro, didn't just upset the entire balance of the World Rally Championship, it (eventually) led to a transformative effect on the consumer car market.

But we're not just interested in this car simply because history has proven the UrQuattro to be important - we love its sharply creased looks, its offbeat soundtrack and its gravel-spitting abilities. Evidently, so does the crew from Petrolicious, as they've lavished their lenses upon the car. This particular model hails from 1983, and has covered a healthy 175,000 miles, says owner Manuel Leon Minassian. His first experience with the Ur (meaning "original") came in Beirut, where the car received plenty of praise from students at his school.

That first encounter led to a long passion for the Quattro, culminating in his purchase of this car four years ago. Take a look at Minassian and his Audi in the latest video from Petrolicious.

Audi UrQuattro gets the Petrolicious narrative originally appeared on Autoblog on Tue, 23 Sep 2014 12:44:00 EST. Please see our terms for use of feeds.