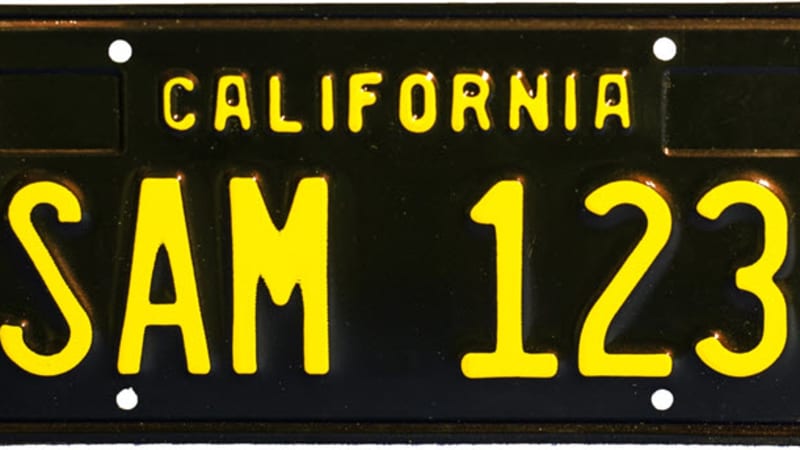 After a two-year pre-order program, the first batch of new black-and-gold California license plates in nearly 50 years are making their way to drivers. The tags start at $50 and can be ordered for any car, motorcycle, commercial vehicle, or trailer.

California hands out its license plates differently than some other states. As opposed to the tag being associated with the owner and switching whenever the vehicle is sold; the plate belongs to the car and remains for its life in the Golden State. Over the decades, the Department of Motor Vehicles there has redesigned its plates going from black-over-yellow during some of the 1950s to yellow-over-black and eventually yellow-over-blue through the '70s and early '80s. We thought it was pretty cool when a law potentially allowed for these vintage looks to come back, but some owners haven't been quite so enamored.

For the state to actually produce these legacy plates, a given color scheme had to receive 7,500 pre-orders from January 1, 2013, through January 1, 2015. That seemed pretty doable given Californians reputation for loving their cars, but according to Truck Trend the program hasn't exactly been a raging success. It claims that only the yellow-on-black tags have received their requisite applications. Black-on-yellow has managed around 2,000 requests, and yellow-on-blue has received about 1,700 of them.

The lack of popularity for the yellow and blue tags makes some sense because enthusiasm for restoring models from the '70s and early '80s is just starting to build. However, it seems like owners of '50s classics would be eagerly hopping onto this program. Perhaps many of them still have their original black plates and don't need a reproduction. Obviously, there are still a few months to go for the other two schemes to meet their requirements. Applications are still available, here, and if a design doesn't nab 7,500 orders the $50 pre-order is refunded.

California historical license plate reissues in jeopardy originally appeared on Autoblog on Sat, 13 Sep 2014 15:00:00 EST. Please see our terms for use of feeds.