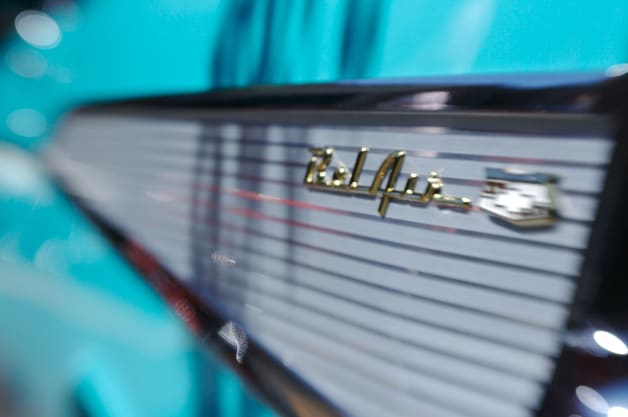 Anyone who follows the collector car market will tell you that prices are up, and demand is high. Indeed, Scottsdale's 2014 auction week, highlighted by the festivities at Barrett-Jackson, was a raging success, with numbers that were improved from the previous year in most significant categories. A look at the final tallies, though, shows that most of the big-dollar action happened in the foreign and exotic categories, with classic American iron from the 1950s falling behind.

In a recent column for Car and Driver, Rob Sass from Hagerty Insurance highlighted several examples of well-known American cars from the 1950s that have been showing an overall stagnant or even slightly downward trend in prices. Classics including the 1957 Chevy Bel Air, Ford Thunderbird and Chrysler 300C are called out, as are some lesser-known models like the 1958 Studebaker Golden Hawk and 1953 Hudson Hornet.

Of course, as pointed out in CNN Money, collectors are urged to invest in the cars they fall in love with and to be proud of their machinery. Still, major questions remain as to how the next generation of auto enthusiasts will respond to the collector car market when it's their own hard-earned money on the line.

Although the vast majority of eyeballs were tuned to the madness at Barrett-Jackson this past weekend, that televised car auction wasn't the only high-dollar game in Arizona. RM Auctions brought its usual gaggle of exotic wares to the desert, and the car that came out on top sold for much more than Barrett-Jackson's highest sale, the Batmobile.

After all said and done, RM reported $36.4 million in sales. That's a record for RM in Arizona, even though the total number of lots for 2013 was reduced significantly. Eight machines cracked the million-dollar mark, and you can see all of them in the press release right down below or peruse all of the auction results here. But first, be sure to scroll through our high-res image gallery of live photos above.

If there's a recession afoot, no one told the bidders at Saturday's RM Auctions sale. A total of 13 cars went home to new owners for $1 million or more, including a 1956 Ferrari 250 GT LWB Berlinetta TdF at $6.71 million. The '56 was hardly the star of the evening, however, as 1962 Ferrari 250 GT short-wheelbase California Spyder fell under the gavel at $8.58 million. The Italian automaker only built 37 250 GT SWB Spyders with covered headlights, and this particular example has the benefit of being both Ferrari Classiche-certified and a Pebble Beach Concours d'Elegance class winner.

A road-going 1967 Ford GT40 Mk I went home to the tune of $2.86 million, while the 2001 Bentley Speed 8 Le Mans Prototype took in $2.53 million. A number of race cars crossed the stage on Saturday, including a '64 Shelby 289 Competition Cobra, which sold for $1.32 million. Check out the full press release below for a complete list of the 13 $1 million-plus sales on Saturday.

The day prior, the auction house moved an additional seven examples for more than $1 million, bumping the total number of vehicles to crest the seven-digit mark to 20. As the auctioneer so poignantly underscored, "It's only money, gentlemen. You can always make more on Monday."