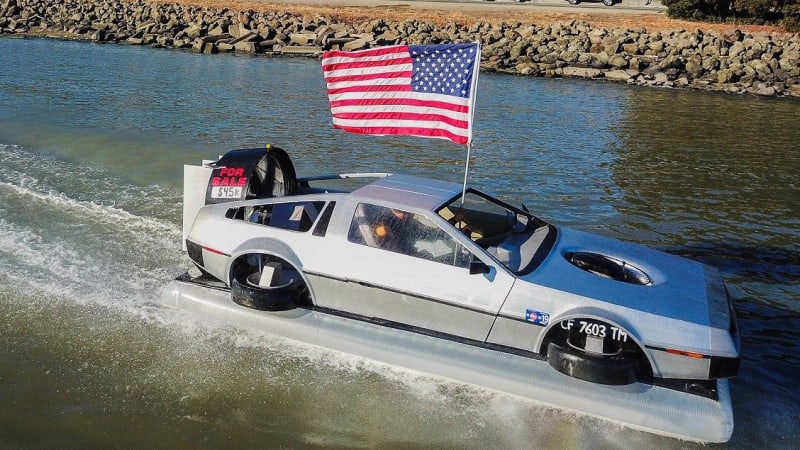 Continue reading DeLorean hovercraft is back with a slick trick video

DeLorean hovercraft is back with a slick trick video originally appeared on Autoblog on Wed, 14 Nov 2018 14:10:00 EST. Please see our terms for use of feeds.

The wheel ranks right up there with the telescope and four-slice toaster in the pantheon of inventions that have moved humankind forward. But what if a circle in three dimensions had never occurred to anyone, and we all had just moved on without it? Perhaps we'd be driving around in Lucas Motors Landspeeders with anti-gravity engines. Or maybe we'd have the same cars we do today, just without wheels.

That's the thought experiment that seems to have led French photographer Renaud Marion to create his six-image series called Air Drive. The shots depict cars throughout many eras of motoring that look normal except for one thing: they have no wheels. The models used include a Jaguar XK120, Cadillac DeVille (shown above), Chevrolet El Camino and Camaro, and Mercedes-Benz SL and 300 roadsters.

Perhaps one day when our future becomes our past, you'll be able to walk the street and see with your own eyes the rust and patina of age on our nation's fleet of floating cars. Until then, Monsieur Marion's photographs will have to do.

Artist imagines eerie world where cars have no wheels originally appeared on Autoblog on Thu, 24 Jan 2013 14:16:00 EST. Please see our terms for use of feeds.

Our favorite DeLorean-turned-hovercraft is back. The Kickstarter-funded project was originally the brainchild of grad student Matthew Riese, and the last time we saw it, the floating car was busily hovering around McCovey Cove in San Francisco. This time, Riese's creation has taken to bombing beaches down by the Golden Gate Bridge. The video below shows the hand-built machine busting along the bay before taking to land for a quick flat spin. We can't convey how badly we want to operate this thing. We'd even find ourselves a Michael J. Fox-spec puffy vest for the occasion.

Where it's going, the DeLorean hovercraft doesn't need roads originally appeared on Autoblog on Fri, 18 Jan 2013 12:45:00 EST. Please see our terms for use of feeds.