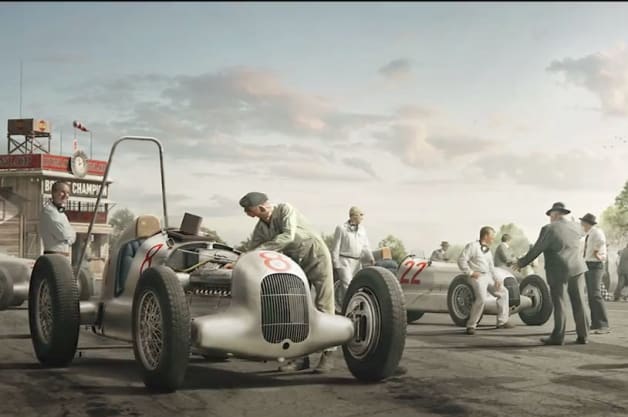 The image above might look like a fairly interesting painting of some old Mercedes-Benz grand prix cars getting, but in reality, it showcases far more than just paint on canvas. To celebrate this year's 80th anniversary of its Silver Arrows racecars, Mercedes commissioned some very talented digital artists to craft a series of 12 depictions of important moments in the company's racing history to display at the Goodwood Festival of Speed.

The Silver Arrow legend starts with Mercedes showing up for the 1934 German Grand Prix with its W25, a car that weighed 751 kilograms - a kilo over the 750-kg (1,653-pound) maximum. Team boss Alfred Neubauer told his mechanics to strip the paint of the cars, leaving them in gleaming bare aluminum in order to shed a little weight. Apparently, it worked, because one of the Mercs took victory in the race and the look became part of the company's legacy.

What makes anniversary project's artistic process so intriguing is that each of these celebratory images is a composite of real-world photos of extras in period-correct dress and digital recreations of some of the cars and venues. As this video shows, it all starts with line drawings that remind us a lot of that iconic '80s music video, Take On Me by A-ha. All of these disparate techniques were eventually combined together to create these fascinating, hyper-realistic pictures of the past.

The video below takes you behind the scenes to show just some of the incredible work required to create this unique look. If you want to learn more about how all of this was done, there's no need to go hunting high and low, Mercedes has a website with additional reference images giving a deeper view of the process.

This Mercedes Silver Arrow image started out like A-ha's 'Take On Me' music video originally appeared on Autoblog on Fri, 14 Nov 2014 10:16:00 EST. Please see our terms for use of feeds. 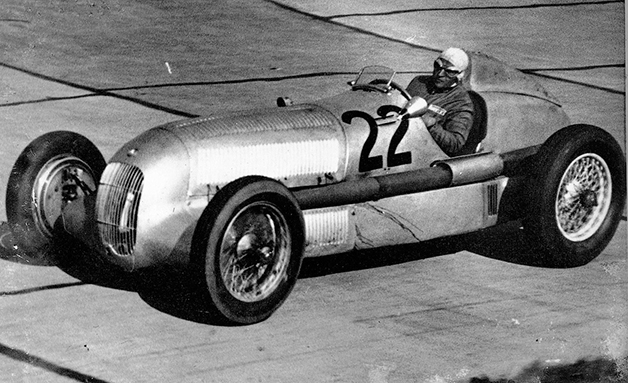 In 1932 the international motorsport oversight body did what many Formula One fans wish the FIA would do today: declared that from 1934 there would be no restriction on Grand Prix racecar design beyond having a maximum weight of 750 kilograms (1,650 pounds). That led Mercedes-Benz to develop the Silberpfeil, the racer that began the Silver Arrows legend, the aluminum-bodied W25. In its first race on June 3, 1934 at the Nürburgring the W25 driven by Manfred von Brauchitsch won the event and set the track record.

The day before the race, however, the W25 was painted white, but when it was put on the scales to satisfy the one condition it had to fulfill it weighed 751 kg. The legend is that the solution devised by team manager Alfred Neubauer: grind off all the paint. The aluminum dart with the supercharged 3.4-liter inline-eight-cylinder stayed at or near the front of grand prix racing for the next five years, then continued the trend after World War II, cementing the Silver Arrows legend into racing history.

You can read all about its history in the press release below and admire the past in the high-res gallery above, then watch its modern incarnation driven by Lewis Hamilton and Nico Rosberg the next time the F1 circus comes to town.

Mercedes' Silver Arrows legend was born 80 years ago originally appeared on Autoblog on Mon, 26 May 2014 10:16:00 EST. Please see our terms for use of feeds.

Driving A Silver Arrow Though The Heart Of Vintage Racing

What I stumbled upon is, quite literally, the stuff of legends.

I'd have been no more flummoxed if Noah's Ark had floated past on a river of rainbows skippered by a pair of unicorns.

I had heard, off in the distance, a rumbling I couldn't quite place. I'd know the basstone of overhead-valve V8 mills from America if I heard them in my sleep, and a quick pinch to the fleshy part of my forearm proved that I was, for better or for worse, wide awake. No, not from America.

The sound continued, louder and more insistent as more engines were fired; clearly not the shriek that accompanies the spinning guts of an Italian 12-cylinder engine, either. And then the unmistakable whine of a supercharger. My walk turned into a quick jog, and then an all-out sprint.

I went out in search of the mysteriously glorious sound of internal combustion. What I stumbled upon is, quite literally, the stuff of legends. It's true: One-horned horses have managed to master the art of ark wrangling. How else could I be seeing a brace of open-wheel Silver Arrows, shivering with every percussion of compression, all hailing from 1934 to 1939 and ready to race? I must be at the Goodwood Revival.

Continue reading Checking the Goodwood Revival off my bucket list

Checking the Goodwood Revival off my bucket list originally appeared on Autoblog on Fri, 16 Nov 2012 14:58:00 EST. Please see our terms for use of feeds.

The Earl of March, the man responsible for the Goodwood Revival, said he's been trying to get all of the Silver Arrows race cars - those of Auto Union, now Audi Tradition, and Mercedes-Benz - to the event for 20 years. This year, the stars aligned. 2012 marked the 75th anniversary of the Silver Arrows arriving in the UK, and there have never been as many of the instantly recognizable winners in one place at the same time. Ten of them, to be specific.

They weren't just there to sit in "the box," either, with drivers like Jackie Stewart, Jochen Mass and Karl Wendlinger throwing them around the Goodwood Circuit. For all of their Wagnerian pre-war thunder,at least one of them was apparently kinder than it sounded: Mass compared the handling of the Mercedes W25, with its over 400-horsepower 4.3-liter inline eight-cylinder, to a Volkswagen Beetle.

For more commentary and a great look at the retro style of the Goodwood Revival, check out the video posted below.

Ten original Silver Arrows assemble at the 2012 Goodwood Revival originally appeared on Autoblog on Sat, 22 Sep 2012 20:01:00 EST. Please see our terms for use of feeds.